Kobushi is a 5 reel, 30 payline slot game created and powered by iSoftBet. The game is inspired by a children’s animated series of the same name that was popular in Japan. The theme of the game and the series is centred around a Japanese sushi restaurant, and all the colourful creatures that could be found in the restaurant. Despite the bright, animated layout and cartoon characters, Kobushi plays like most online slots, but does come with some of its own variants of popular bonuses, such as wilds, free spins, and multipliers.

Kobushi, like the series, is set within a restaurant, and the background is made up of everything one would need to enjoy sushi. Due to the animated nature of the series, the slot itself has a cartoon-like feel and aesthetic to it. Number and letters, the bread and butter of most slots, make up the symbols of lower value. Despite this, the numbers and letters are well drawn, and fit in well with the overall theme of the game. The symbols that consist of the characters themselves are a throwback to the television series, and those familiar with the animated show will recognise many of the characters straight away. The characters are, in fact, different types of sushi, and each has its own style, with all of them relating back to the series.

Beneath the reels are several settings, including betting options, payline selections, and the buttons necessary to start the game up. In the middle of the selections is a large spin button, which players can click to begin Kobushi, once all other preferences have been set.

One of the sushi characters in Kobushi is wearing a bandana, and this is the symbol that acts as the wild of the game. The wild, like other slots, can be used as a substitute for most of the other symbols, and it allows for more combination possibilities. Landing three or more of these wilds can also give the player an instant payout of up to 1000. 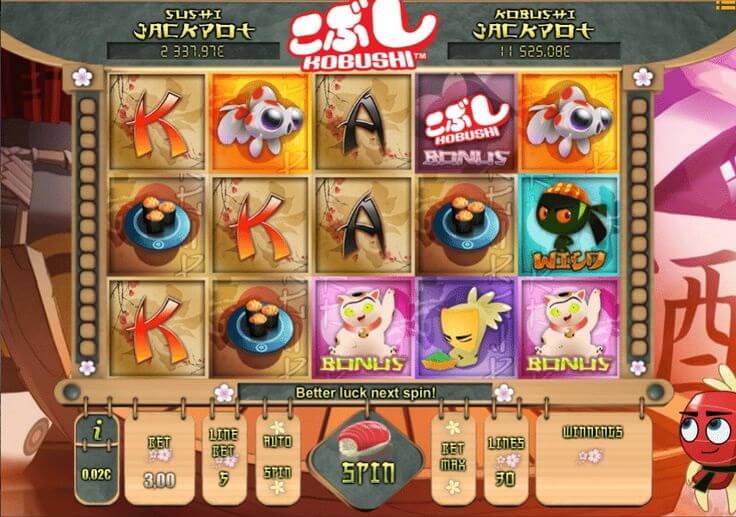 The main bonus feature of Kobushi is the Big Cat Bonus, and this is what will keep players stuck to the game. A pink, waving cat symbol has a chance of landing during base gameplay. Once players have managed to land at least three of these cat symbols, a bonus round is triggered. Players are presented with different bowls, and have the options of choosing from one of these bowls. Each one of the bowls contains a number of free spins as well as a multiplier that can go as high as 5x. After the player has made their selection, a small wheel will begin to spin. This wheel determines which one of the symbols in the game will act as the wild during the free spins bonus rounds.

There are two different jackpots that can be won in Kobushi, and both of them are progressive. These are the low and high jackpots, which both have a chance of activating, provided the player is playing Kobushi at max bet.

Kobushi is definitely a mobile casino Malaysia game that appeals both on solid gameplay as well as nostalgia for those who enjoyed the television series. Even if that it not the case, the bonus free spins and Cat Bonus, alongside two different jackpots makes Kobushi worth checking out.