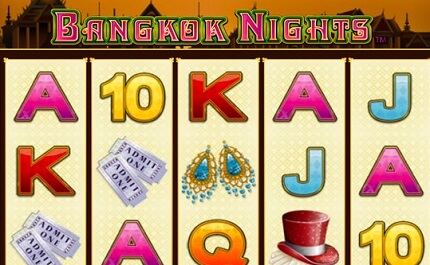 Bangkok, Thailand is one of the party capitals of the world. Your every taste can be indulged in this party garden of Eden, be it food, culture or a good time. Bangkok Nights is a five reel slot that has twenty optional paylines. Each line can be played for as little as 0.01 coins and up to 2 coins. This makes Bangkok Nights not a very expensive slot to play which will appeal to those of a lower budget. The maximum bet in Bangkok Nights is 40 coins per spin.

The graphics in Bangkok Nights all represent various aspects of a night in Thailand, Bangkok to be precise. They are nicely drawn but not overly special. The detail is pretty enough however and will keep you interested, if even for a short while. On either side of the reels is an ornamental gold dragon emerging from a lake with a temple in the back ground. The reels themselves are plain cream with blocky symbols.

The slightly less exciting graphics do mean that the game runs very well on mobile devices however, being Android, iOS and Windows compatible. This game can be played on smaller screens such as a smart phone without losing any of the atmosphere.

Most of the symbols in Bangkok Nights are theme based, with the exception of the very lowest ones which would be more at home in a poker machine. The rest of them however include tickets to a show, feather earrings, a top hat and an ornate mask. These all differ in value from 100 coins for the base poker card symbols up to 1250 coins for the mask.

A dancing show girl is the games wild, but since it is Thailand it maybe a show boy. The dancer will substitute for all symbols except for the scatter. The wild will give you a payout for even one of them, albeit only two coins. Five of them however will award you with the games standing jackpot of 10 000 coins.

This is triggered by the games scatter icon which is the entrance to a nightclub. Three or more of these will award you with twelve free spins that also come with a three times multiplier. More spins can be triggered by finding more scatters during the free spins round. This can go on until a total of twenty four spins have been awarded.

When the show girl wild appears on reels one and five it will trigger the pick and win feature. This is a very simple bonus round where you have to choose one of the visible show girl wilds.  This could reveal a cash prize of up to 1000 times your bet. If your first pick is not quite what you wanted, you can run the risk and opt for the second icon. Beware however, once you have done this you cannot go back to your first choice.