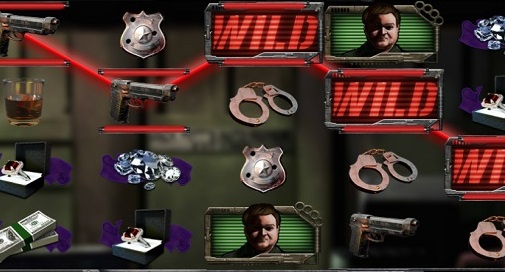 Crime Pays, developed by WMS Gaming, is a slot centred around crime, more specifically, a detective out looking for the person that killed his brother in a story of revenge. Slots generally tend to shy away from dramatic stories in general, but WMS Gaming is known for making games that try and steer away from online slot norms. Despite this, Crime Pays is a standard slot in regards to core gameplay, having a traditional layout, along with tried and tested gameplay.

Five reels and fifty paylines make up the base game, where the ultimate goal is to try and snag the huge jackpot. This jackpot not only guarantees massive winnings for the player, but is also the only way to end the storyline woven into the game, where the player manages to capture the criminal that murdered the detective’s brother. While the jackpot is the main focus of the storyline, nothing is taken away from the gameplay, and there is some bonus content that can be triggered.

The first thing to mention about the aesthetic of Crime Pays is the darker, more sombre tone. The story of vengeance and crime is obviously meant to portray a more serious nature, which is in stark contrast to most other slots on the market. To accompany this theme, the visuals of the game are dark, gritty, and have everything to do with crime in general.

Symbols themselves are made up of a plethora of crime related imagery, featuring everything from handcuffs and pistols to the actual criminals. The soundtrack also adds to the overall crime noir theme, and the entire game is set against the background of a detective’s desk.

One thing that does set Crime Pays apart from other slots created online is the number of scatters that are included in the game. All the scatters can be landed during base gameplay, and each has a specific function. There are four different scatters, namely the police siren, the crime logo, the free spin symbol, and the pays symbol. Additionally, each symbol can only land on pre set reels, meaning that something like the police siren, mastermind, and free spins symbols can only be found on reel 3 of this slots game.

The free spins symbol along with the crime symbol instantly grants the player 5 free spins. Successful combinations that are landed during the free spins bonus rounds are doubled, and added to the overall winnings for the current spin.

The wild in Crime Pays has an alternate function other than simply being a substitute. Landing five of these wilds will grant the player an instant payout of 100 coins, which are automatically deposited into the total coin amount.

This slot is aimed at people who like their slots with a lot of different bonus features that compliment the base game. The multiplayer jackpot will be especially appealing for those looking to try and land some big winnings. Crime Pays may put off some players due to the grim nature of the story.